His slicked back hair was a bag of baby carrots smashed with a copper pipe. A square jaw line was only partially obscured by his matching, well-manicured and untrustworthy beard. He stood an unimpressive 5’11, his wide torso perched atop bowed legs that preferred faded Levi’s. His pale, slate blue cashmere v-neck attempted to soften his features, but only amplified his façade.

All too comfortably, he balanced a glass of scotch on his bent knee, looking at my mother and laughing in a way that seemingly only I knew to be, a cunning and calculated manner.

His piercing blue eyes did not fool me the way they fooled my mother. As he pulled a Marlboro red from the package, I skirted him with apprehension and a deep mistrust that radiated in a way that let him know I saw right through him.

Ron Summers entered our lives in February of 1982, a few day’s before my 11th birthday. Our babysitter arrived one night, and our mother emerged from her room in a deep burgundy, form-fitting cocktail dress, with flawless makeup, gold jewelry and high heels. The smell of Shalimar seductively trailed behind her.

Who was this person? Our mother never dressed like this. She told us she was going out to meet a friend, told us to behave, kissed my brother and I on our cheeks and told us she would come tuck us in again when she got home. Things were never to be the same again.

The next evening we were told that we were going to be having company. Mom had been drilling my brother and I all day on how important it was for us to behave, not throw fits, not fight, not back talk, not curse, not hit each other. She was basically asking us to be somebody else’s children for the night.

Suddenly, we were the children of a mother dressed to the nines, with an apron, setting the formal dining room table, preparing beautiful appetizers, taking delicate cream puffs from the oven and carefully scooping out the centers as she set them on the rack to cool.

The gold leafed glasses that had been handed down by her ex-mother-in-law were lined neatly on the credenza, along with the new bottle of scotch, a few bottles of wine, the silver ice bucket and tongs. Real cloth napkins that I didn’t even know we had were folded, flowers arranged, candles lit, cowlicks tamed, final warnings administered.

The doorbell rang and she checked herself quickly in the mirror, tugged at her dress, stood up straight, and answered the door with her award-winning smile.

Joey and I were actors on a fantastical set. Our house was messy, things were broken and stained, people yelled and fought while the TV blared and mom sat, in her dark green, floor length zip-up bathrobe, on the phone with the long twisted cord, slurring her speech slightly with a glass of scotch attached to her hand.

But tonight, things were different. We stood temporarily in the life we had always longed for. The house was clean and tidy, my brother and I were both dressed in new, fresh clothes, and the lights were comfortably dim as the fire crackled in the living room. The marble coffee table was pristinely arranged with assorted appetizers, little cocktail napkins, and sparkling crystal ashtrays resting on side tables.

Soft music played in the background as the two gentlemen were escorted up the stairs from the foyer and introduced. “Hi, I’m Tracy, it’s nice to meet you” I begrudgingly recited my line, as did my brother. Their names were Mr. Gaily and Mr. Summers, “but you can call me Ron!” Followed by a glance at my mom, smooth chuckle, and an attempt to make us like him, which failed miserably.

They were well dressed and businesslike, smelling of cologne and achievement. Mr. Gaily was tall and thin, blond, and spoke with a thick German accent, which I was both captivated and mesmerized by. The other man, “Ron” was obviously the one our mother was interested in. Their familiarity, inside jokes and casual, easy laughter let me know that their relationship had evolved somewhere else, behind my back, on those evenings she left the house in heels, smelling of Shalimar.

As we sat like prisoners of war at the dinner table, we listened to Mr. Gaily go on about his life in Germany, and how he was just here for the week for business. I never did understand what their business was, but I did enjoy the hard edges of his speech, and the surreal feeling of the candlelit make-believe night.

From that night on, Ron became a permanent fixture in our lives, marking the beginning of a very long, excruciatingly cataclysmic downward spiral. 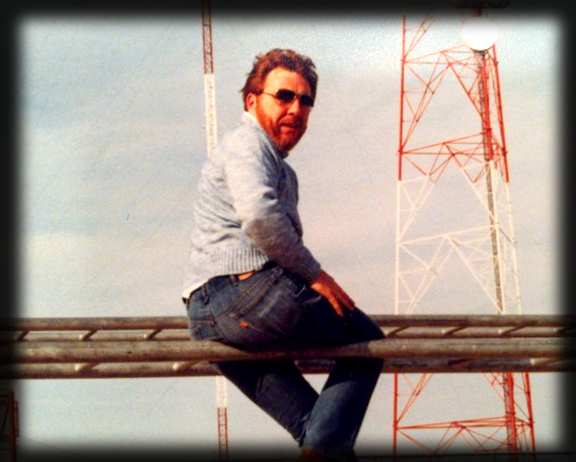